UK patient with MS - 2nd check up after treatment

When I was diagnosed in 2006. I Went to the hospital where I attended the Neurologists clinic to late 2007. He said that I was benign MS. And I thought it was good news I carried on with my life through to late 2010. When my wife was told that she had terminal cancer and she had about eight weeks to live. So that would be the first flare up MS symptoms I had which was optical neuritis in my right eye. Slowly over time, other things started to happen. My imbalance. Talking and I can remember the terminology MS fog. And that was how I was feeling. Whenever I went shopping with my mom anybody looking at me would've thought I was drunk. My balance was certainly off kilter. Hence for that thought I could have been a drunk. My memory, on the cognitive side work but quite bad. My handwriting was also very bad. And, there was, nothing to look forward apart from doom and gloom. After being a roofing contractor. And employing people for the last thirty years. Losing that. Losing one of my other companies. As I lost pest controller, losing that. The loss of my house that I sold to enable me to pay for my own treatment. Because I was unable to get any help apart from yoga and Pilates in the U. K.

In 2014. my sister and mother had going online and come across Swiss Medica and had spoken to them and the following day had telephoned the house. And said that they had a lady in that was having, had stem cell transplantation I would like to speak to her. After speaking to the lady in Moscow. I could tell in the voice how wonderful the care that she'd had and I realize it wasn't a scam, and there was nothing to lose I just need to book a plane and go. That was it.

Returning from Swiss Medica in December 2015. friends and family from around the world picked up, they recognize dissed in my voice that I was able to hold conversations. At length about anything I was able to go into a room and put my 5 pennies worth conversation into a debate way before that I was unable to. I shortly joined a gym of which the benefit to myself was immense and long my stay that way. People have asked me, they quite surprised that I'm in the gym for five days a week. What would I've been like had I have gone into the gym, before I have my treatment and my answer to them was I would feel like a basket case. I certainly on the treadmill I don't even think I would have been able to stay upright for more than two seconds so it wasn't a good look. But now, to have my strength coming back and all the rest of it, even when I did go back for my second visit to Moscow, labor surprised at the physical strength in my legs and walking and talking and everything, so nothing to lose.

Considering when you have MS and you looking for help and every avenue you go down. It seems to be close, because is it a scam. Well I can to show people that it isn't a scam. They're very helpful people. The treatment is 110%, I would recommend them to anybody.

I've just come back from a month’s bright holyday in Canada and it was really good to go out salmon fishing with a good friend of mine that's living out there. And for just for me to fish and tie a hook to nylon and go fishing was a step in the right direction. So for myself, the rest two 2016. just to get myself fit and well and my body stronger. Working in the gym. I have everything to look for to.

As Debbie got ill Leslie got ill as well. He started losing his balance. He started to not be at a function properly. Whole scenario was just too much. So how did you divide the trauma of what was going on in the house with the trauma that he was going through which was an episode of MS. After his stem cell, I think it was the second stem cell transplant places, his eye, it had a problem with something like three and a half years had cleared up. His strengths are improved. His walking improved. He's not had an eye problem. And we will go back in September only do this check out over again. MS come up and got rid of but he can be pushed back. And if you can keep pushing that back there is no fear. Go to Swiss Medica, this will help you. 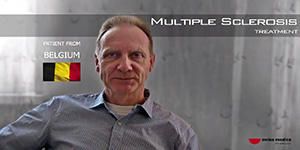 Patient with Primary Progressive Ms which was diagnosed in 2012. After individual consultation he came in clinic for stem cells therapy. 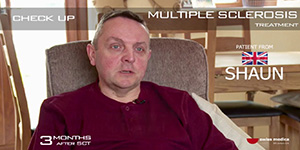 Three months after stem cell treatment for progressive Ms, he feels 80% better and going to the gym 3 times a week. 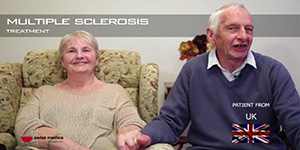 Patient with diagnosed Multiple Sclerosis 30 years ago feels much better after treatment with stem cells in December 2015.