PRE-TREATMENT CONDITION: Physical examination shows stable vital signs. The patient is diagnosed with Progressive relapsing ms type. Multiple sclerosis relapses happen quite often (no detailed timeline) and usually last anywhere from few days up to a week. Symptoms get worse as the time passes. Patient has no remission periods. She complains mostly about vision problems ("blurry"), "back" pain, bowel and urinary problems. Movement coordination is getting worse, as well as "whole body" weakness and vertigo described as "constant dizziness". The rest of notable symptoms are as follows by severity: Stiffness in legs (mostly right), Sexual dysfunction, fatigue ("constant tiredness") and depression

PATIENT CONDITION: After stem cell treatment, the patient had no side effects, seems more energized. The patient is very satisfied with elimination ("almost all") of back pain. She feels much stronger than before. All symptoms improved to a certain level. Blurry vision, fatigue and dizziness somewhat improved but less than other patient multiple sclerosis symptoms. She had no relapses while at the clinic.

Patient condition: 3 months after Stem cell treatment, the patient is mostly satisfied with the results of the treatment, especially with elimination of intense back pain and weakness. Urinary problems are less frequent, muscle stiffness and tingling are rare. Movement coordination and depression are less pronounced but still a problem. The patient is mostly dissatisfied with improvements in vision, fatigue, dizziness and sexual dysfunction. Vision is much better but still "kind of blurry". Fatigue is not constant but occurs quickly after any kind of activity. Dizziness has similar affect. Sexual dysfunction improved the least. Patient had no Ms disease relapses during these three months.

Patient condition: Patient had no relapses during these six months. Ms symptoms improvement grades show stagnation of improvement in fatigue, tingling and weakness, but she is only dissatisfied with amount of fatigue. Some symptoms improved greatly: Vision ("just a little blurry now"), Dizziness (only when standing up), Bowel problems (rare), and Depression - the patient seems quite cheerful. Sexual dysfunction "seems to be improving". Back pain is almost completely gone. The patient is generally satisfied with the results of the multiple sclerosis treatment with stem cells. 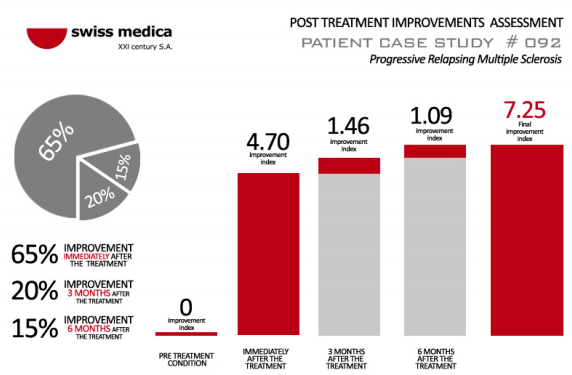 Based on the patient's evaluation on the levels of improvement of her multiple sclerosis condition (improvements of the Progresive relapsing Ms symptoms are graded 1-10) we can conclude that her overall condition significantly improved (average rating of 4.70) immediately after stem cell administration. First follow-up evaluation showed additional improvements in most of her multiple sclerosis symptoms (average rating of 6.16). Second follow-up evaluation showed some stagnation but significant improvement in some of the symptoms. Final improvement rating is 7.25 - patient's symptoms improved 72,5 % by her own assessment.